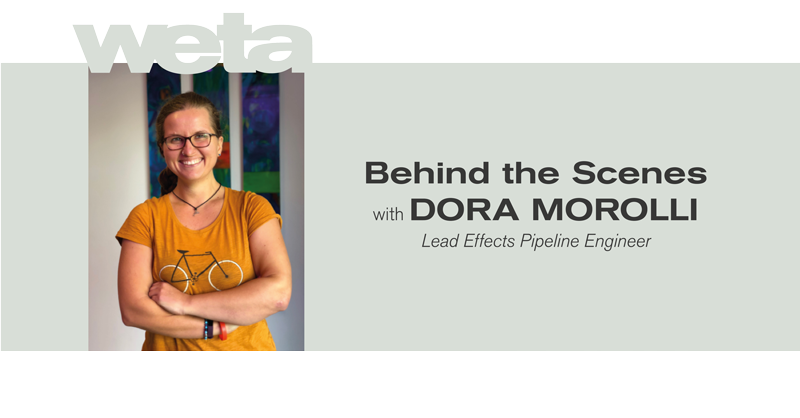 Behind the Scenes with Dora Morolli

Italian native Dora Morolli shares with us her background, settling into New Zealand and her career journey that led to her role as a Lead Effects Pipeline Engineer.

Where in Italy are you from?

I come from a beach town called Rimini, on the coast of the Adriatic Sea. My family owned a small hotel, so I grew up surrounded by people of different nationalities and languages.

My mum is a writer and my dad is an accountant. From this mix, my sister and I started to love both words and math. When Dad brought home the first personal computer, it was love at first sight. I was so fascinated by how words and pictures could appear on the screen and how the computer would reply to my commands! Let alone when I received the first (text based) video games! Dad and I would spend a few hours tearing our PCs apart, testing new hardware and building them again.

We got our first Internet connection around the late 90s. The sound of our 14K modem dialing up every night became the soundtrack of my teenage years. Not long after that, when the first monthly phone bill arrived, I was grounded to only use it every other day, for maximum of one hour per day. I was hooked!

How did you get into VFX and how did you end up working here?

My first step into the visual effects world was just before graduating from uni, when I started a web development internship for the Italian animation company Rainbow CGI.

I have always loved animation movies and this was a great opportunity for me, especially because I was very uncertain about my future. After a few months working there they offered me a proper job as pipeline developer, for designing and building their new databases and tools for a new project. I taught myself how to program using Python, MEL and ActionScript, and how to use Maya and Nuke.

After the project was finished, I’d received an offer to work for another animation company in Brussels, Belgium. Due to its international marketplace, there are several languages spoken there, so everybody is very fluent in English.

It was my first experience living and working using the language and on top of that I learned French. After a year, I finally received an offer to work for the VFX company MPC in London, where I was developing tools for several departments and helped to deliver The Jungle Book.

Every now and then, I would head to the Weta Digital careers page, just for daydreaming and curiosity. One day, they had an opening that sounded exactly like my job description. So, I applied without giving it too much of a thought. When the recruiter replied after a couple of hours, I thought it was a joke! I still cannot believe it sometimes.

I have fulfilled one of my childhood dreams! As a kid, I loved Disney cartoons and comics and always wanted to work on one. This happened at both MPC and Weta when I worked on The Jungle Book. As well as having my name in the credits, I also go to hold the Oscar and celebrate it with my fellow Wetans!

You’ve been here nearly two years, how has it been for you settling into New Zealand life and what do you miss most about home?

I really love New Zealand! The slow pace of life, the quality of the air, the ocean and mountains everywhere. It’s so beautiful! I also love Wellington’s vibe and its sense of community.

From Italy, I miss my friends, my family and the connections you can only create with people of your own culture and language. But mostly I miss Europe—the language diversity, the food and the possibility to visit so many incredible places in a couple of hours flight.

What are your top three favourite movies?