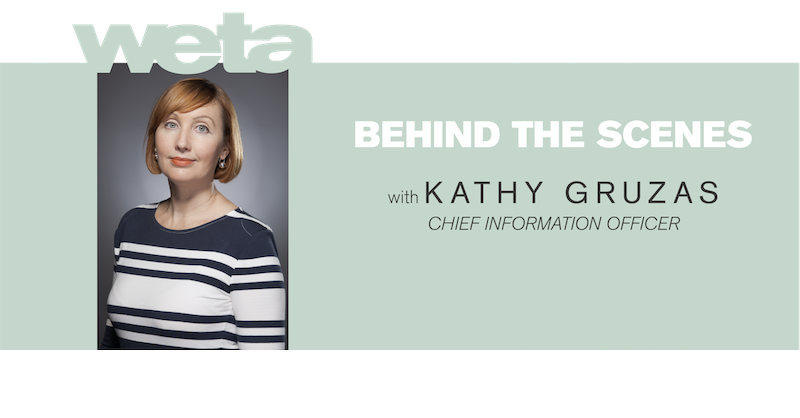 Behind the Scenes with Kathy Gruzas

Kathy Gruzas talks about her career journey that led to becoming our Chief Information Officer.

Can you tell us about your background?

I’m from Sydney. At 14, I got an after-school job working for a magazine production company as a junior layout artist, which I loved. Straight after high school, I studied graphic design and product photography, and continued working in the print design field. In my early twenties, I went travelling overseas, ending up in London. I started work in the advertising industry. It was the early nineties, and commodity computing was just starting to take off and the World Wide Web was emerging. I had always been into technology, electronics and computers—my father ran a hi-fi store and was generally into electronics and gadgets— but I was still surprised to find that I was the only one using the solitary Mac sitting in the corner to do my typesetting and layouts. In a previous studio where I had worked, the owner was very into new technology. He was always flying off to the States and coming back with the latest equipment...we got to play with the very earliest Macintoshes and versions of Photoshop and PageMaker, not realising at the time how lucky we were to get such useful exposure and experience. It was only a matter of time before I was pushed (initially reluctantly) into becoming the agency’s first IT person, tasked with putting a networked computer on every desk, backend servers, and providing an email system and Internet access. I was sent off on a raft of IT courses, read nothing but IT manuals for years and worked closely with consultants to achieve the outcomes we wanted. It wasn’t long before I fell in love with this brave new world of endlessly interesting things to learn and opportunities, and I embraced my new career in IT after that, part engineer, part people and project manager, building up my first IT team.

The agency grew from 40 people to 1000 and our systems grew hugely in complexity (as we were responsible for the Tesco Clubcard, an early and very successful loyalty scheme), and we expanded our direct/database operations into above the line and digital marketing, and acquired a public relations firm. Later, we were acquired ourselves, and by age 26 I was IT director for a group of UK-based marketing companies.

What work were you doing prior to Weta Digital? Were you in the VFX Industry?

I moved back to Australia in 2006, and that was when I first got into the film industry, working for Animal Logic in Sydney. I had been there for five years, and was doing a technology-focused MBA when I got invited to apply for the role of CIO at Weta Digital, in mid-2011.

What does your role as CIO entail?

Being the big-picture and escalation point person for IT at Weta Digital. Before I started, the technology teams were split into front office (R&D, pipeline, VFX software development) reporting to the CTO, and back office (infrastructure, platform, information/ management systems, support etc.) reporting to the CIO, so essentially it’s overseeing what you’d call traditional IT. I work in a very consultative and collaborative way with my wonderful team, prioritising our focus and making sure we’re all pulling in the same direction.

Has your role here evolved over the years?

So much has changed, and we’ve grown so much in size and maturity. In many ways, my job has gotten easier over time (if this doesn’t happen, something is wrong) as I initially set out to improve the culture and get the best people into the right roles. Once that’s in motion, it’s a matter of helping them grow, aligning our efforts and getting out of their way. Although I’m very proud of the team and what we’ve achieved so far, there are always new challenges and still so much to fix and do.

What are your thoughts on women in technology over the last decade? Do you think there’s a lot more interest now? If so, why do you think that is?

If I hadn’t been lucky enough to fall into my career, I wouldn’t be here. When I was at school, it didn’t occur to me that a technology/science engineering career was even an option, no one encouraged me in these areas. In fact, quite the opposite, girls were made to feel that these were masculine talents and we were insidiously steered in more traditionally feminine directions (despite the ‘women can do anything’ mantra that was drummed into us). There were few role models or mentors around, and it takes a lot of courage to be an anomaly—to prove that you can do things that are inherently assumed to be ‘beyond you’ just because of your gender, in a male-dominated arena. This is where it starts. It’s a huge subject, and covers a number of issues—banishing gender stereotypes, recognising unconscious biases, promoting gender equality and gender diversity, addressing workplace culture-issues, providing family-friendly workplaces and supportive societies, etc.

Do I think there’s more interest, or women in technology now? Not enough—things are changing, but far too slowly. Women are still very much proportionally under-represented, particularly at the top and are still leaving the industry, and it’s been that way for my whole career. At least I don’t get asked if I’m someone’s EA any more these days...

Do you have any personal projects/hobbies?

Now the weekends are mum/daughter time, and we love exploring Wellington’s playgrounds and nature walks, hanging out at Kilbirnie Pool/Recreation Centre/Library, or frequenting kid-friendly cafés, such as Chocolate Fish.

What are your favourite things to do in Wellington?

I’m still tabling all the child-friendly activities as life has changed; Cuba Dupa, Coastella and the Royal New Zealand Ballet’s ‘The Nutcracker’ were favourites this past year.