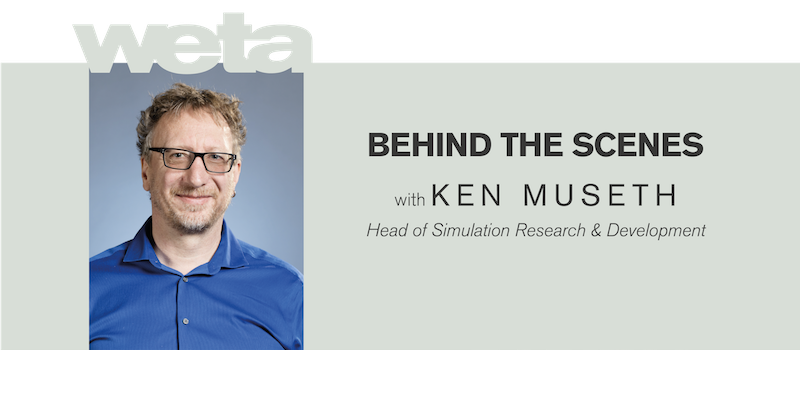 Behind the Scenes with Ken Museth

We catch up with our Head of Simulation Ken Museth and find out how his career path took a turn from chemistry and physics to movies and rockets.

Where are you originally from?

I was born in Denmark.

Your background is in academia—can you tell us what you studied?

I studied physics and chemistry. I hold a Ph.D. in quantum mechanical studies of chemical reactions from the University of Copenhagen.

Can you tell us how you transitioned from academia to CG?

In the late 1990s, I moved to the USA to follow my academic career and ended up at Caltech (California Institute of Technology). At Caltech, I was studying an area of physics and chemistry that was very theoretical and specialised. I didn’t have a lot of peers and felt very isolated. The human aspect is very important to me. I was approached by a guy who worked at NASA’s JPL. He heard I wasn’t happy and asked me to join him working in CG. So, I worked at NASA’s JPL on trajectory design for the “Genesis” space mission for almost two years. I loved it. I then spent the next five or six years transitioning from physics to computer science and then to VFX.

Tell us about your introduction into VFX. How did that happen?

I was at Caltech for five years when Digital Domain contacted me. They were at the tail end of production on The Day After Tomorrow. The film had a tsunami scene and it just so happened that I was specialising in surface representations for water simulation. They made me an offer, but I got cold feet and decided to pursue my academic career. I moved to Sweden to become a professor, but I kept in touch with Digital Domain.

Over the years, I sent interns to them and they all came back raving about their experience. Hearing their stories, it all became too much for me, so next time I sent an intern I took leave and tagged along. It was so much fun. After a year, I said I’m not coming back and that’s how I ended up in the movie industry. After three years at Digital Domain, I went to work at DreamWorks.

In 2015, you won an Academy Award for the creation of OpenVDB. Can you tell us what that is?

One of several things I studied was a mathematical method that can be used for water simulations. It’s a way of doing sims but without using a lot of computing resources. Throughout my academic career, I was always trying to improve the technology. When I came to Digital Domain, I was at my third or fourth iteration and at DreamWorks I was able to focus on this and just get it right. Long story short, it actually became an open source project and is used in the entire movie industry including here at Weta Digital. In fact, earlier this year it was the first open source project to be adopted by the newly formed Academy Software Foundation, operating in collaboration with the Linux Foundation. This is exciting because it means I can now keep supporting this project from within Weta Digital.

You work for SpaceX. Can you tell us what you do and how that came about?

Initially, when SpaceX reached out to me, I was convinced it was a mistake—I’m not a rocket scientist, why do they want me? It turned out they wanted to use some of the data structures and algorithms I had developed for movie production, to simulate rocket engines.

Their recruiting team were quite determined, and I think I may have been a bit slow to accept their offer, so they asked Elon Musk himself to call and convince me!

I worked for them one day a week as a consultant in their Propulsion Analysis group and the rest of the time at DreamWorks. We were working on simulating a new generation of rocket engine that will take humans to Mars. The challenge is that it is a rocket propelled by methane, which is an usual yet highly attractive type of fuel. Methane can be synthesised on Mars.

So, I’ve worked there for the last four-and-a half years and I’m very fortunate to still work for them one day a week. I feel very privileged to be given this opportunity.

Where were you when Elon Musk called?

I was having lunch with some friends at DreamWorks when I got a phone call from Elon’s assistant asking if I had time to talk to Elon. I said “Yes! One sec!”, and ran to the parking lot. I was huffing and puffing when Elon got on and completely out of breath.

He told me to stay cool, and just take a deep breath.

Can you tell us about your team here?

We are currently focussing on a lot of water simulation, hair, muscle and fire. A lot of pieces and the challenges is to get it all working together. So, the idea is to develop a single system that can do everything.

What do you love most about what you do?

Working in the CG industry is the best of both worlds. There’s still the math but also a strange interaction with all these other fields like VFX, incredibly creative artists, and of course applied physics.

I don’t get a lot of pleasure in just developing the tool now, I want to see it getting used. That’s one of the reasons I left academia—it’s all about writing the papers. To me, it only has value when you can put it in someone’s hands and they can create something. That’s what you see when you interact with artists—you create a tool, hand it over and see it used in ways you never anticipated. It’s very satisfying.

You seem to be very busy! Do you have time for hobbies?

Yes, I am writing a technical book. It’s about some of these techniques I have been using and abusing for so many years. I also like motorcycle adventure riding. The last big ride I did was in Death Valley. If you haven’t been you should go, it’s like a foreign planet. It has the most bizarre landscape. Very hot, but still so beautiful.