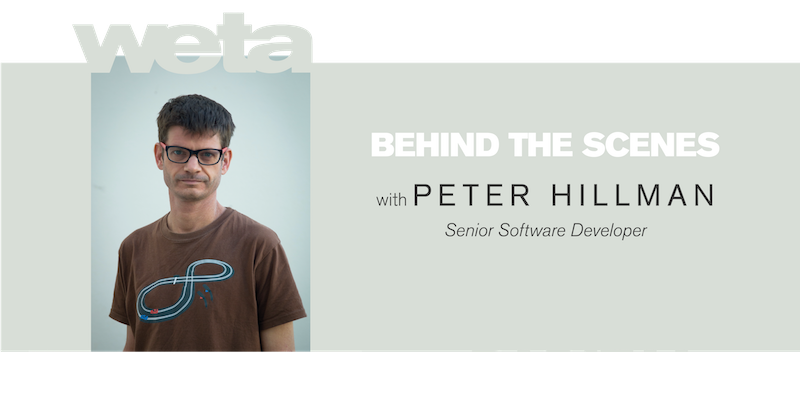 Behind the Scenes with Peter Hillman

Peter Hillman talks to us about his career path and the challenges and rewards that come with his role as Senior Software Developer.

Can you tell us about your background?

I grew up in Sheffield in England, and then moved to Scotland and studied in Edinburgh for longer than I ought to have done, with a year at University of California in San Diego along the way.

I studied electronics and computer science, and stayed on in Edinburgh for a PhD and some post-doctoral research. I chose those topics because they were my hobbies, without really thinking of a career.

Can you tell us about your work history and how you arrived to work at Weta Digital?

I always wanted to somehow work in the film industry, so I did a few trainee placements on various films while I was studying. Then I realised that on set work largely consists of learning on the job, with very long apprenticeships and a lot of competition, but computers were something I already knew about.

I discovered that in visual effects I could write computer software to help make movies. So, I did my PhD in keying techniques for compositing, which gave me the background I needed as well as a few contacts. I'd also done a bit of work on processing pictures from 3D-stereo cameras—although those cameras were designed to detect cow's udders in milking parlours, rather than make movie features! I was doing that just as the R&D for Avatar was happening, when Weta was developing tools for compositing in stereo, so it was fortuitous timing.

What does your role as Senior Software Developer entail?

I'm officially the lead of 2D developers in the Software Engineering Department , but there’s actually only two of us and I’m the only full-time 2D developer in the department. As 2D developer, I focus on tools that work with images, rather than with 3D geometry. Those tools cover a lot of ground: tools that bring in the video footage filmed on set, tools that help process and combine together the CG images we make internally, and tools that prepare the final shots to be sent to the client.

Working in R&D means developing tools that try to automate or streamline the more mundane tasks done by artists. We're also continuously on the look-out for new techniques which produce better-looking shots. A lot of those ideas come from Weta artists and developers, but we also look at academic publications to see if there are new techniques we can adapt for our use. Since most of the tools I look after are used by compositors, I sit with them, and meet with the rest of the Software Engineering team whenever I need to. As well as developing and fixing tools, I spend a lot of time doing support. That usually means working with artists to understand why tools may not be working in the expected way, but sometimes it's a more creative discussion about how to achieve a particular result. Sometimes the brief for how a shot should look is quite open-ended, so there's often a brainstorming session about what options we have using the tools available. Most of the time we can solve problems without writing new tools, just using existing ones differently. That means I don't spend all day writing software.

I spend quite a lot of time supporting the colour management workflow at Weta as well, which tends to involve a lot of people from different departments. That makes my days quite varied.

Can you tell us about the parts of your job you like the best and the parts you find most challenging?

The best part for me is the teamwork. It's what first attracted me to working on movies — all those people who have their own skills and talent working together and depending on each other to make a couple of hours of entertainment. That collaboration can also be the most challenging part, particularly when people think about things differently. It's sometimes hard to cross the gap between what the tool needs to do and what the picture needs to look like, particularly as it's more common to think about the look in artistic terms, and what the tool needs to do in scientific terms. In the end, it always gives me a little buzz seeing a shot I was helping with appear on-screen in a cinema.

You played a significant role in the development of deep compositing, and were honoured with the Technical Achievement Award at the Academy’s 2013 Sci-Tech Awards. How did it feel to have your work recognised on the world stage?

It was fantastic to get the award, even if it was largely down to chance. It wasn't at all what I was hired to do, but I ended up working on deep compositing for several years. Weta's tech ended up in publicly available file formats and tools, which all helped to win over the Sci-Tech committee. Projects like that don't come along that often.

The whole process was a bit of a blur—we'd submitted Deep Compositing several years running and it was rejected, then suddenly I had to go and give a presentation and be cross-examined by a panel when they were considering it. Then before I knew it, there were red carpets and cameras and evening dress!

The fact that the awards aren't just for VFX, but cover all sorts of movie making tech makes the whole thing a lot more special and glamorous. That year, there was an award for a machine that flips cars, and a mini-helicopter for aerial filming.

It was great to be there with Areito Echevarria, who was also awarded for his work on deep compositing, as well as Martin Hill, Nick McKenzie and Jon Allitt, who got their award for Spherical Harmonics the same year. So, we all got to dress up in Beverly Hills and have a bit of a Weta party!

There is more information about deep compositing on Weta Digital's Technology and Research pages:

What do you love most about living in New Zealand?

Even though I've been here over ten years, it still feels like I'm on holiday. My favourite way of spending a weekend in Wellington is finding a downwind day tramp, where there's brunch at one end, cake at the other, and good views to photograph in between.